Fullmetal Alchemist was written and illustrated by Arakawa Hiromu (born Hiromi). It’s interesting that “Hiromu” is a pen name that female writers usually use when choosing the category of shonen manga. The manga was released between 2001 and 2010. It was adapted into two anime series for television. The first one had an alternative ending since the manga hadn’t been finished and the scriptwriters had to finish it anyway. The second one had the same ending as in the manga. I’m touching upon the anime series because the alternative version is worth noticing equally with the original one. Funny enough but the fans still can’t agree which ending is better.

The plot of Fullmetal Alchemist

Edward Elric, a young alchemist, and his younger brother Alphonse try to bring their mother back to life performing a forbidden human transmutation. The resurrection fails, and Edward loses an arm and a leg and Alphonse loses his entire body. Using alchemy, Edward attaches Alphonse’s soul to a large suit of armor. Trying to find a way to restore their bodies, Edward joins the military to gain certain alchemical privileges and the brothers start a long journey to find the Philosopher’s Stone. 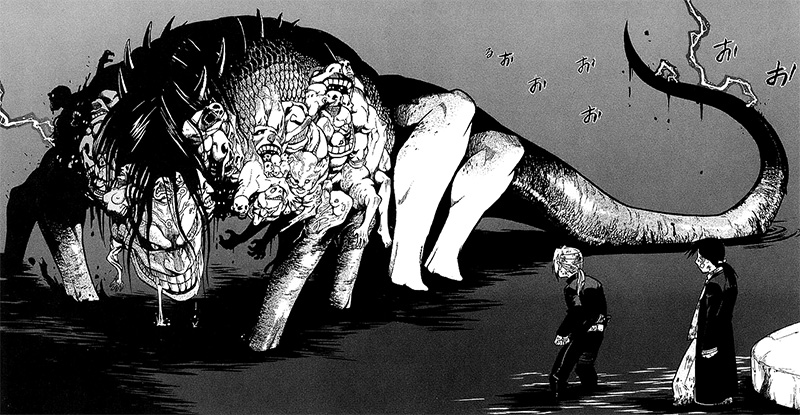 The illustration from Fullmetal Alchemist

The pluses of Fullmetal Alchemist

To start with, the plot is already built on the so-called the Law of Equivalent Exchange and on the hope to bypass it. It’s already thrilling and intriguing. Moreover, we are not in for a big disappointment – takes a load off mind! Gathering speed, the plot transforms from an ordinary adventure linear manga into an epic story with intrigues and unexpected twists.

In addition, I’d like to note that the plot is not cliché at all despite some “secret organizations” that, of course, are supposed to be defeated. The author represents the story in a concise way, step by step, without any holes and bungled narrative strands. By the end of the piece, everything falls into place leaving no uncertainty. It seems like you feel a pleasant taste after reading a great book but that’s it – you don’t need it to be continued.

As I’ve already mentioned, the series is pierced with balance and logic. I have no complaints to this part. For instance, the character A can’t beat the character B because they are different “weight classes” and some magic “power of love” won’t help A. What is more important is that we see the logic in the characters’ motivations and actions. This manga proves that women usually pay a lot of attention to details.

Actually, we can see the same abilities, techniques, and magic tricks as in other similar titles. The difference is that here it is called “alchemy”. The fights are spectacular and dynamic, especially the single combats. 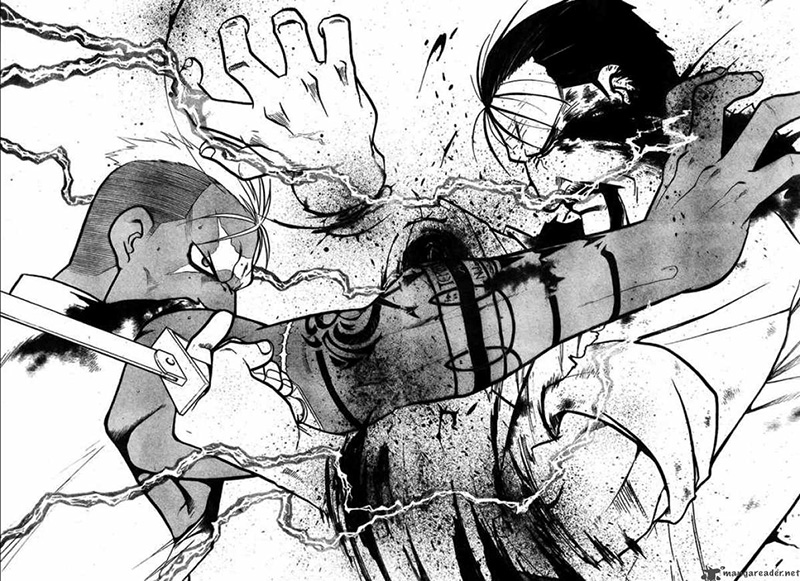 I really like it that the author avoids long tiresome descriptions of the actions during the fights as, for example, in Naruto and Bleach. At the level of action and fights Fullmetal Alchemist reminds me of Darker than Black. There aren’t any profuse talks as well.

There are plenty of titles with the stories developing into the problems concerning the whole world. Usually, readers know about a “global” ending beforehand. However, I can’t say the same about Fullmetal Alchemist. The manga surprised me with its sudden twist: an ordinary “quest” turned into an epic battle for the planet. 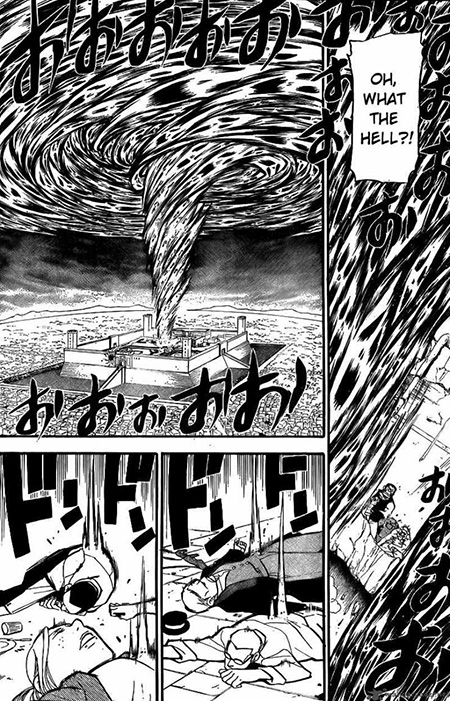 An epic battle for the planet

The author prepares us to the ending step by step. The story is set in alternative Europe in the beginning of the 20th century. At first, the main character is small potatoes compared to the people in power. Of course, against the background of the pre-war situation, a single low-level government employee isn’t able to do so much. Eventually, taking part in the key events, the protagonist is growing in experience and finally can deal with the problems on a global scale. Besides, he doesn’t forget about his prime purpose.

Despite the fact that Fullmetal Alchemist is a shonen manga (and we know that shonen usually targets a teenage audience), it brings up the issues not intended for children such as genocide. Sometimes the level of violence is so high that it shocks. For example, one alchemist transmuted his little child into a chimera in order to achieve the aim of his researches – to create a chimera that could speak. He really couldn’t understand what he did wrong. The chimera could say only one word “daddy” and she could also cry. It makes my heart bleed. 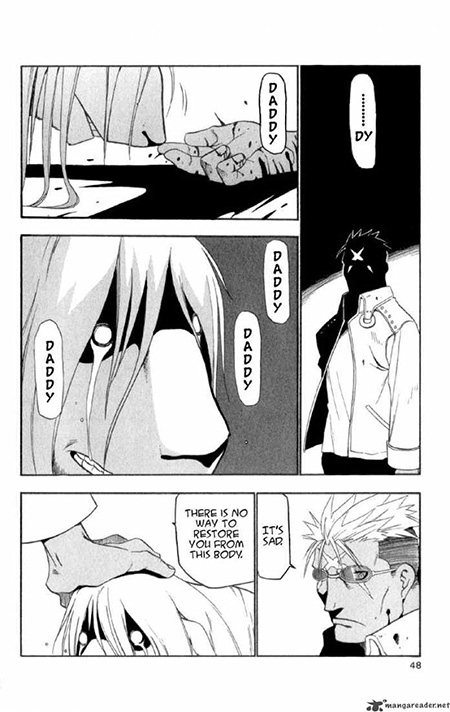 The girl transmuted into a chimera

If you are fond of steampunk and dieselpunk, this manga is right for you. It’s a pity though that the variety of mechanisms is not so great but still it looks fascinating. 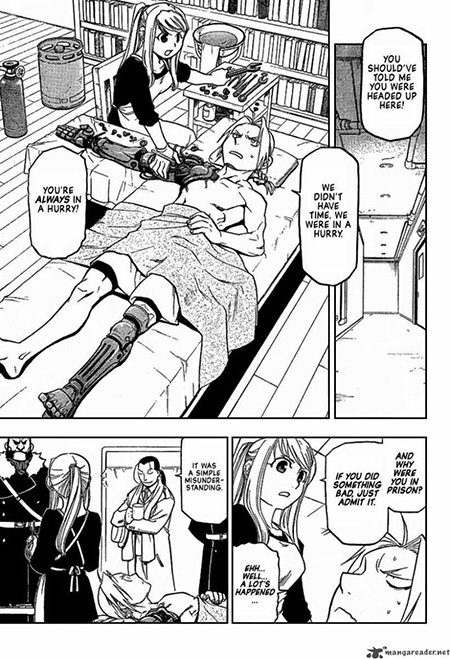 There is a great diversity of personages in the series, so you will find one (or more) to fall in love with. In addition, there is no so to say “pure evil” in the manga and even the antagonists’ actions can be justified. 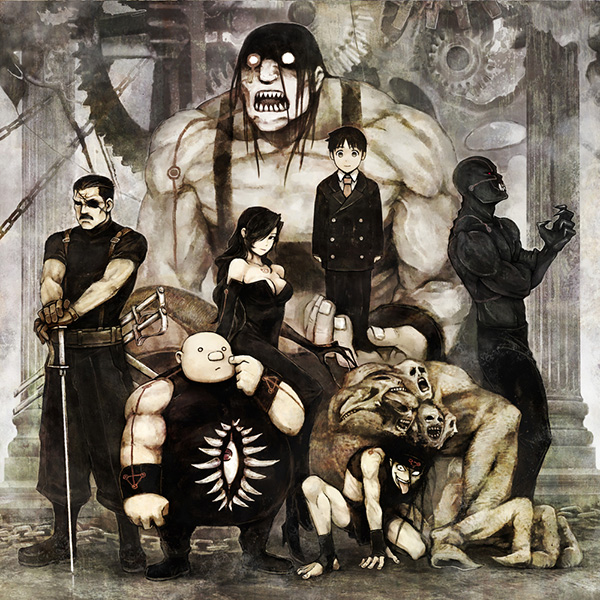 The characters in Fullmetal Alchemist

The author thoroughly produces the heroes’ personalities. The characters are not infantile; they are just people who have been up against serious problems and difficulties that had a major impact on the development of their personalities. I should note the depiction is very realistic and natural as distinct from similar titles where characters’ personalities and motivations can be based on some offences given to them when they were children.

In the manga, we can see a true-to-life artwork, with right proportions and without exaggerations and abstract images. Actually, there is nothing extraordinary in the artwork but it’s quite clear, detailed, and epic where needed. Everything is just fine. It brings pleasure to the reader.

The artwork in Fullmetal Alchemist

Who else but a woman can convey tear-jerking moments to the full extent? Some scenes will really touch you to your very core. There are sacrifices for the sake of friends, unexpected deaths, and the characters with unhealthy state of mind. You won’t see any affected pathos in the dramatic moments and you will empathize with the characters at their hard times. 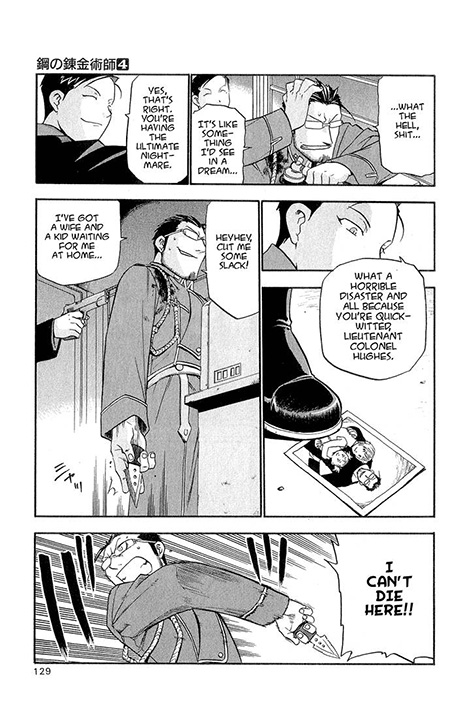 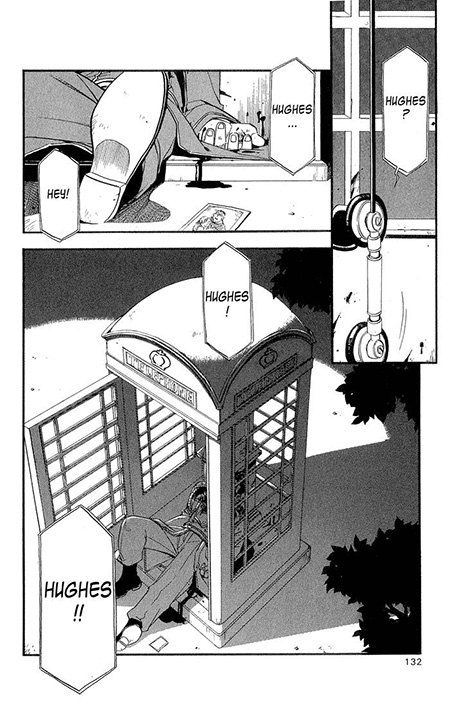 The minuses of Fullmetal Alchemist

On the whole, the humor is not the best part in this piece. It’s not the first manga where a great deal of comical moments is connected with some stupid characters’ complexes.

2. Incomplete representation of the army

I understand that the story revolves around alchemists but, first, there aren’t so many of them and, second, there are fewer military alchemists. I think the author could have represented the army in military countries to the full extent since the world is in a war-without-end stage.

As you’ve already noticed, Fullmetal Alchemist has got more pluses than minuses and it’s a good result. Let’s sum up:

Are you a fan of steampunk manga? Do you want me to review your favorite? Drop a comment letting me know what you like.