Remember those nail-biting action scenes with shootouts? The fighters boggle our imagination with their excellent skills and inimitable styles.

In the previous article, I’ve already reviewed the greatest sword fighters in manga.

Now, it’s time to remember the best gunner characters and again in terms of their mastery but not strength. I’ll cover only well-developed characters with only one exception. And like in previous list of the best sword fighters, I’m not going to describe such characteristics the represented personages have as reaction, intensified perception, superhuman abilities, and so on since their level is really high in comparison with their opponents’ abilities and powers.

So, let’s have a look at the top 10 best gun fighters in manga.

Livio is one of the key characters in the manga Trigun. He is a professional killer and a member of The Eye of Michael. Interestingly, Livio has two personalities that use different kinds of weapon and different fighting styles. 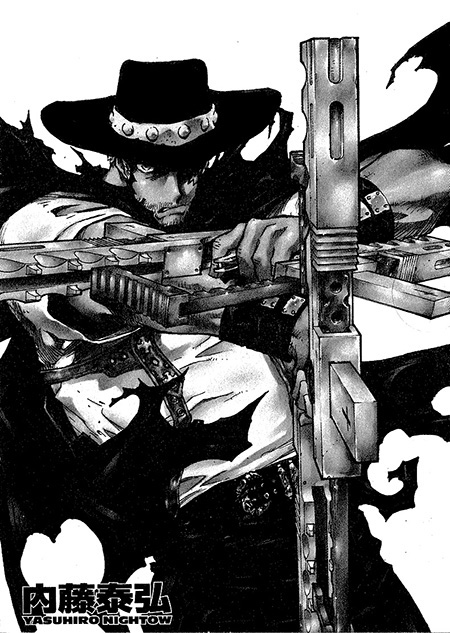 Livio wields two double-barreled guns called “Double Fangs” in the way he can fire forward and backward at once shooting enemies in front of and behind him. The shooter is able to fire full circle which is very effective against big enemy teams. Moreover, during a shootout, Livio moves so quickly that it’s difficult to aim at him and at the same time he manages to fire without a miss while jumping, rolling over, and so on.

Livio can fight not only from a long distance but also standing very close to an enemy blocking and repelling attacks, shots, and even grenades with his Fangs. Just imagine! He could beat off grenades from a launcher at close range. Besides, he combines shooting with hand-to-hand fighting and he is well-versed in it, no doubts.

What’s more, Livio is great at analyzing enemies’ actions, features, behavior, and tactics. This skill helps him to adjust to opponents’ fighting style, especially when they excel him in speed and abilities. Furthermore, due to his well-developed regeneration ability, Livio lets an opponent to inflict several wounds on him in order to get more information. Thus, working out strategies and getting serious wounds, Livio puts an enemy to a disadvantage and takes a chance to win. 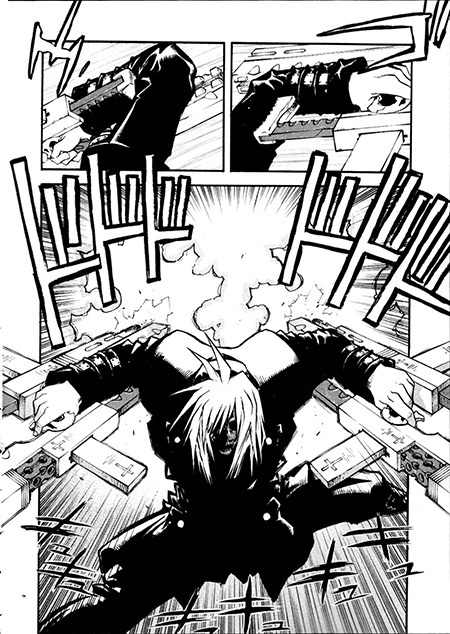 Livio’s alter ego, Razlo, was created to take all of the abuse from his father when Livio was a child. As a result, Razlo became a violent, crazy, and dangerous person. 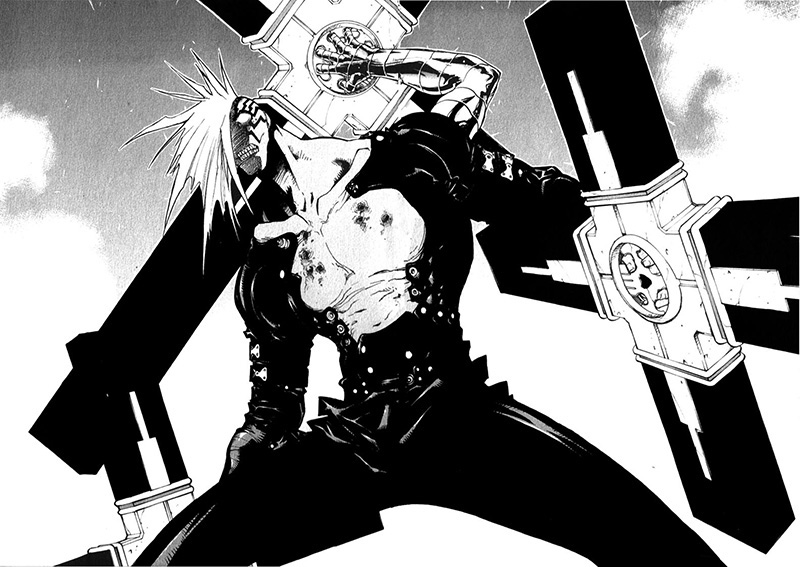 As opposed to Livio’s Fangs, the Punishers provide a heavy volume of fire and destructive power of the three grenade launchers. Does the enemy have any chances? I doubt it. Razlo can shoot in the way two shells collide close to an opponent and the explosion kills him straight away.

He is also good at close-in fighting with the help of the three Punishers at once shooting them simultaneously. Since the Punishers are made of steel and are really heavy, Razlo can kill an opponent with a single stroke. 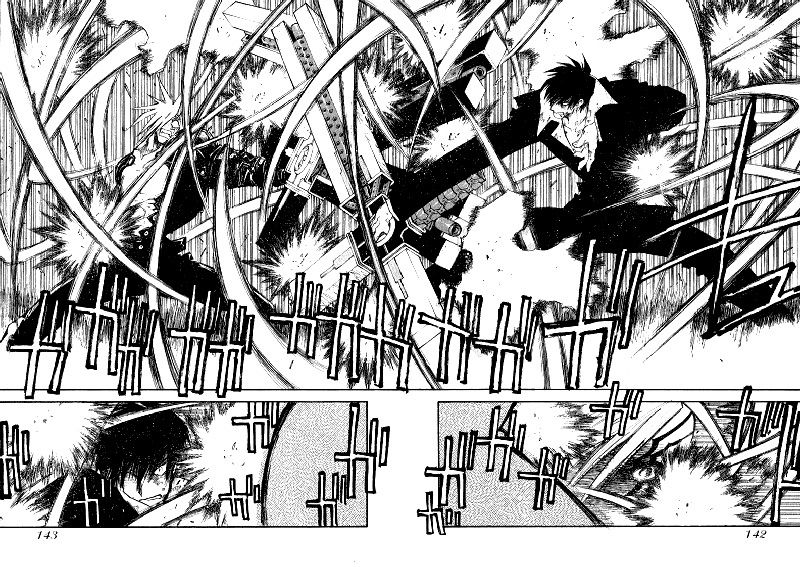 Nicholas D. Wolfwood is one of the key characters in Trigun, the protagonist’s best friend, a professional killer and a member of The Eye of Michael. 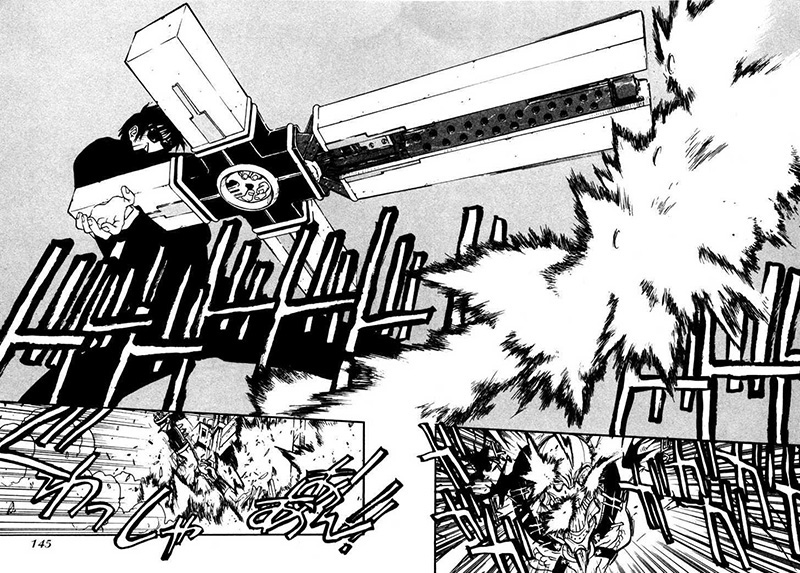 Nicholas wields a Punisher and a handgun. He is well-versed not only in sniping firing with the Punisher and grenade launcher but also in wielding his machinegun in close-in fighting. With the help of the Punisher, Nicholas can strike several enemies at once and block their attacks and use the gun as a shield when approaching to them. He is able to fight blind even against a top opponent. Covering enemies with gun bursts, Nicholas manages to wound them in where he aims but not to kill anybody. Nice touch!

Similar to Livio’s skills, Nicholas is an expert analyst. He analyzes enemies’ actions, features, behavior, and tactics and adjusts to their fighting style. As opposed to Livio and Razlo, Nicholas excels them in analytical skills and combat tactics so that he could beat them despite his modest physical abilities and arms. 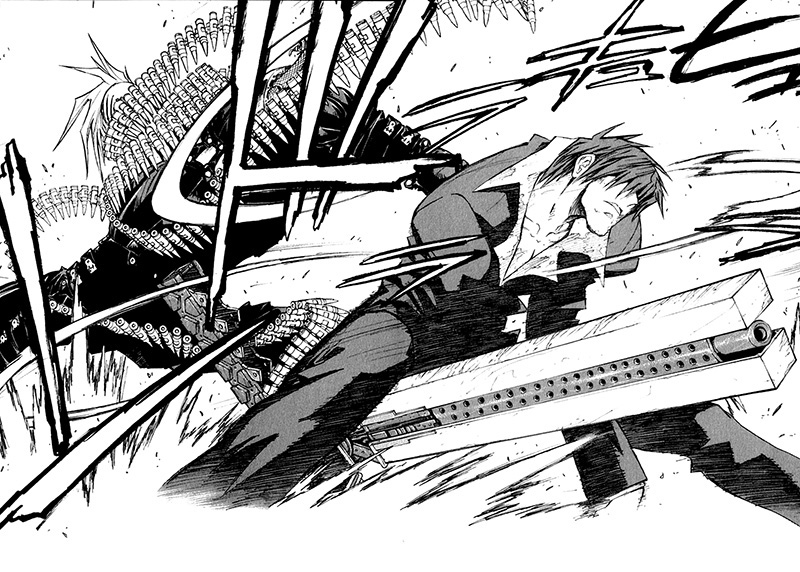 Again, there is another character from Trigun – Vash the Stampede, the main protagonist. He was nicknamed “The Humanoid Typhoon” due to the destruction he “brings” with him wherever he appears. 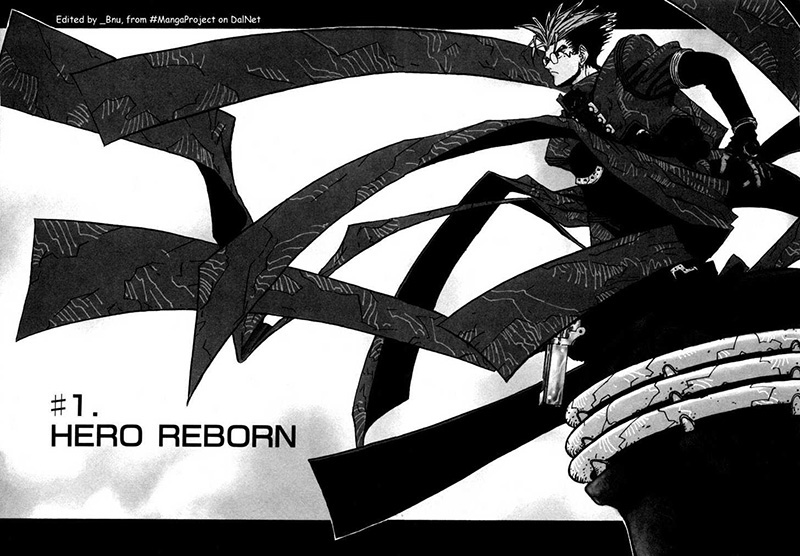 Vash is a highly experienced marksman. He trains himself for several hours every day. He uses a revolver supplementing it with a submachine gun when needed.

His skills are really impressive. Vash fires a target unerringly while jumping or rolling over even when he is wounded and exhausted. He is able to shoot off the burning fuses of six thrown dynamite sticks at once. What else? Vash can fire with two hands simultaneously and perform such tricks as kicking a grenade from a launcer.

In addition, as a crack shot Vash is endowed with great visual and perception abilities. For example, when fighting with numerous enemies, he counts their shots and knows exactly when each of them will be run out of cartridges. Having looked over the fighting area just out of the corner of his eye, he remembers the opponents’ positions (and there are dozens of them!) and can pick them off blind without a miss from behind cover. 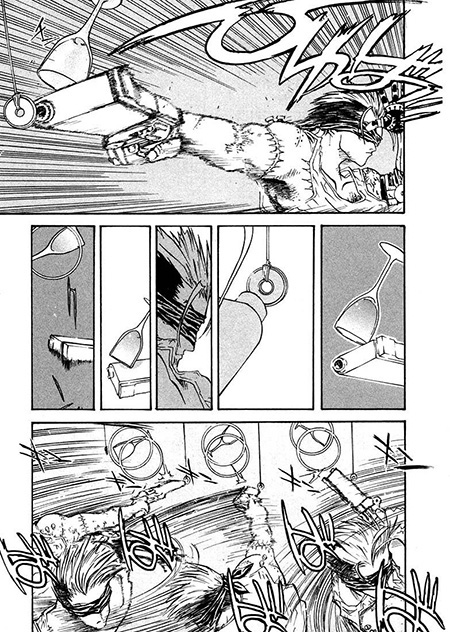 Vash during a shootout

Train Heartnet is the main character in the manga series Black Cat, a coldblooded killer working for the fraction called “Chronos” as the Number XIII. 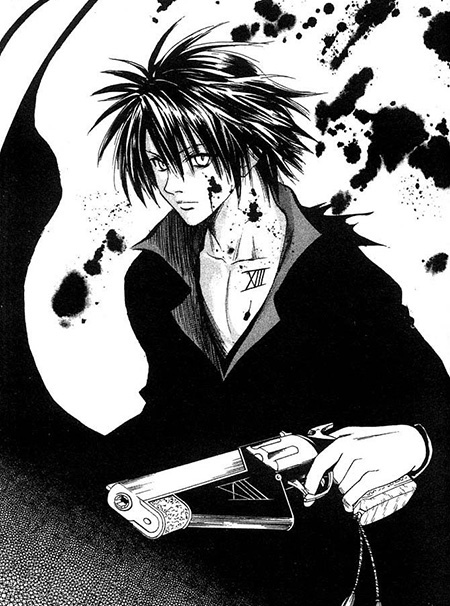 This guy is a sharpie! He is well-versed in marksmanship and manages to put a bullet into other barrel so that an opponent’s gun breaks down. Moreover, Train possesses a special ricochet technique: he shoots down bullets from other guns and makes some of them ricochet from different surfaces and hit a target.

Train is also great in close-in fighting. He uses his revolver to block blades or bullets as well as to strike an opponent with a hilt or a barrel. In different situations Train uses different kinds of bullets such as explosive bullets, flares, tear-gas cartridges, freezing and sedative bullets. 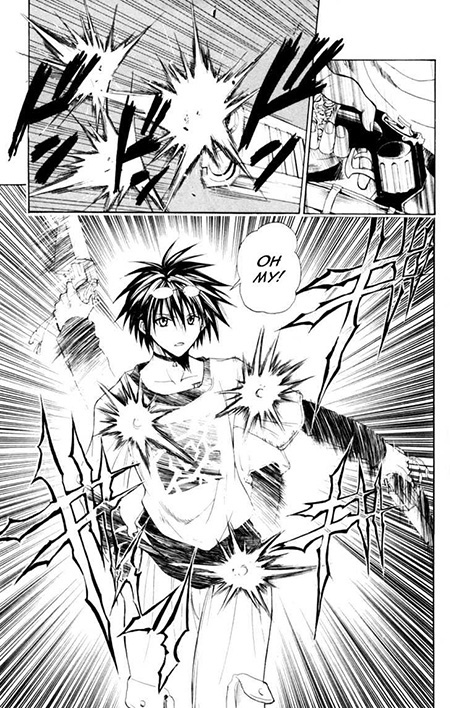 Zoichi Kanoe is the main character in the manga Biomega, a synthetic human created by TOA Heavy Industries. 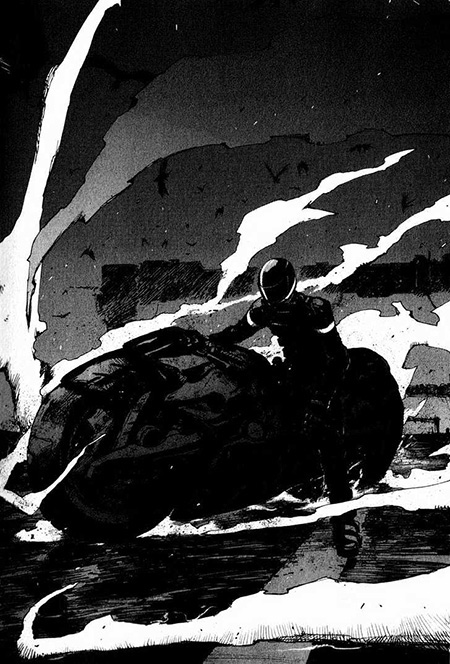 As a personage of sci-fi origin, Zoichi wields extremely powerful high-tech long-range weapon. An excellent gunslinger, he is able to draw a gun and shoot down a bullet just after an opponent has fired him at close range. Zoichi can hit 30 enemies in their heads at a distance of 50 meters in the blink of an eye.

When firing a railgun from the planet surface, he is able to hit the objects that move at a high speed in the upper atmosphere. That’s massive!

Zoichi is well-versed in hand-to-hand fighting and fencing. Besides, he is able to hit opponents while riding the motorcycle. 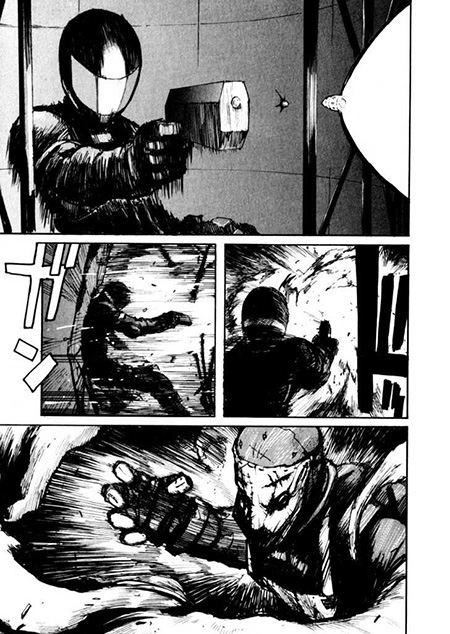 Zero is the main character in Kurohime, the protagonist’s friend. 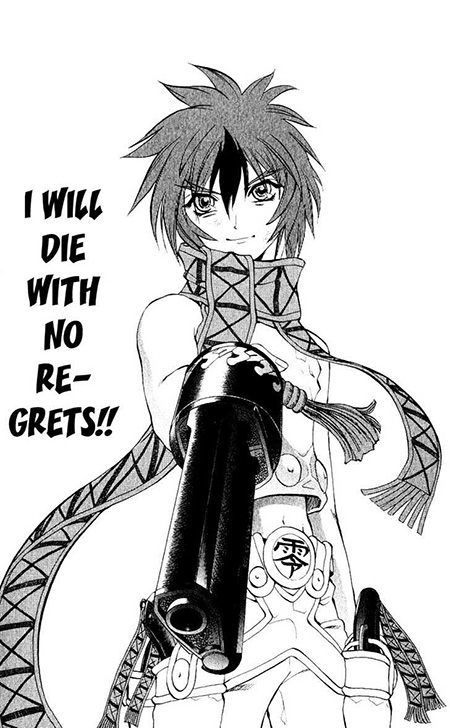 Wielding four revolvers at once, Zero became known as “Zero of the Quadruple Guns”. When he is firing four guns at the same time at high speed, one gets the impression as if he has four hands with four guns:

Zero manages to fire all the 24 bullets in the way they all hit one and the same spot. Thus, the destructive power of the shots gets so high that the slinger can break off a piece of rock. 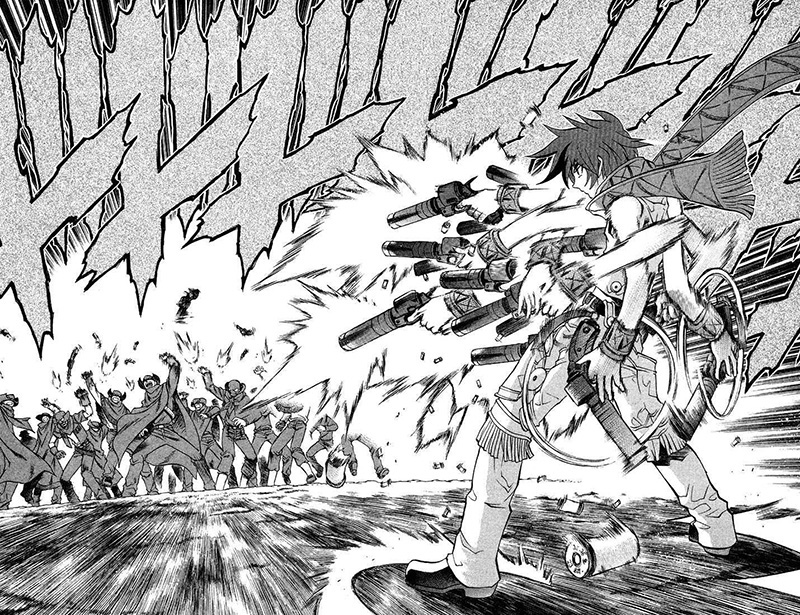 The illusion of using four guns with four hands

Seras Victoria is a heroine in the Hellsing manga series, a former police officer, the member of the Hellsing Organization. She was turned into a vampire by Alucard, the protagonist in the series. 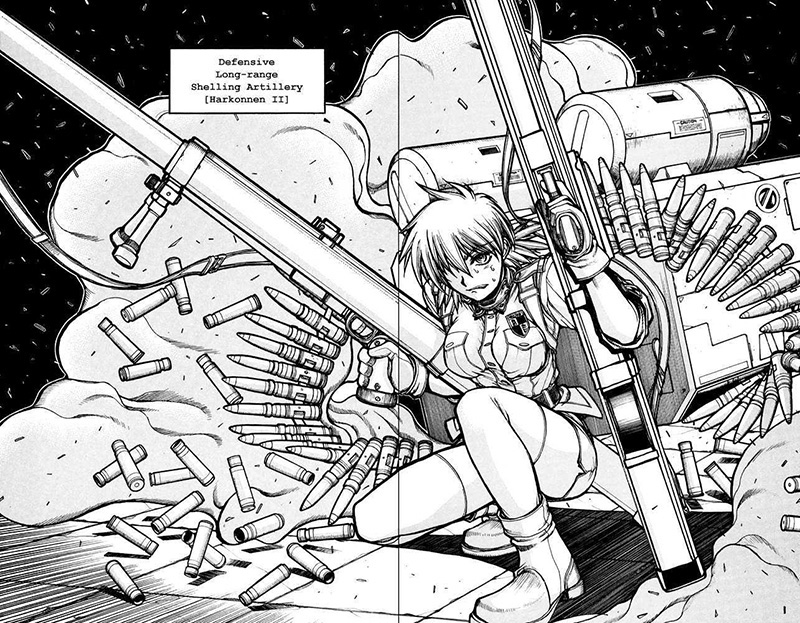 This vampire girl is endowed with superhuman strength and vision so she can hit a target over 4.5 kilometers away. Seras uses Harkonnen II which is a whole system of destructive weapons with 30mm auto cannons. Its armor-piercing shells can destroy targets at a distance of 4 kilometers. The weapon is massive!

Combined with her eyesight and strength, Seras is able to hit a target when moving so that she has a huge advantage in fire power in close-in fighting. She manages to keep the speed and dodge bullets. With the Harkonnen II she shot down 24 planes almost at once. 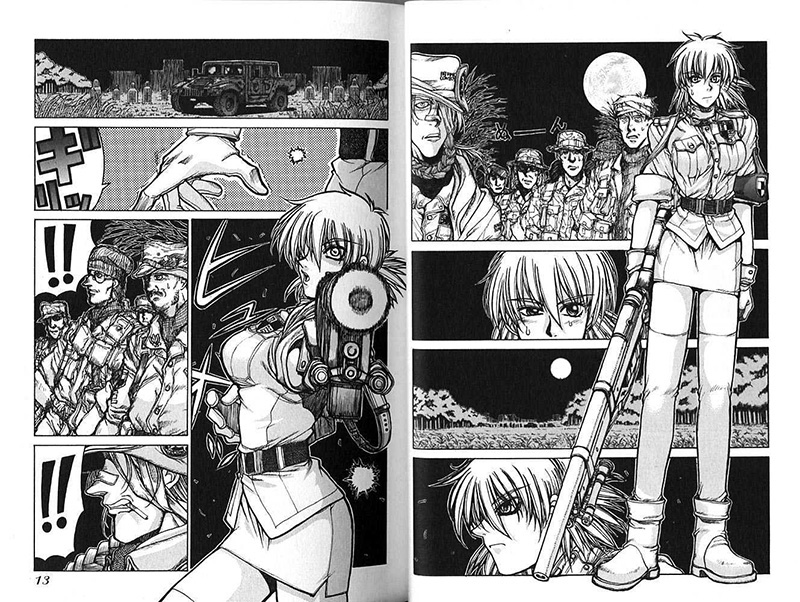 Rushuna Tendo is the main heroine in the manga Grenadier, an errant shooter. 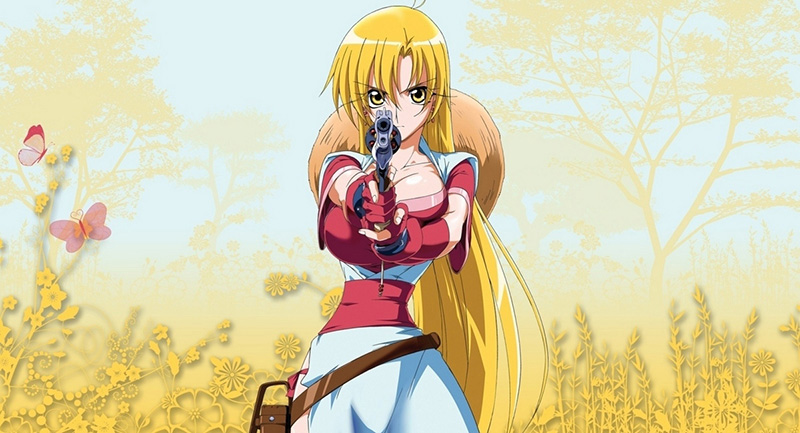 Well-trained in marksmanship, the young girl usually uses a revolver but also wields any kinds of fire weapon. She shoots straight while jumping, rolling over, and dodging the shots of dozens of submachine gunners.

Rushuna is good at long-range shooting. She is able to shoot with both hands and yet in the dark orienting by using her ears. Even Rushuna’s basic abilities can strike an enemy dumb. For example, she manages to shoot down bullets in the air or shoot off a cock of an opponent’s gun at a long range.

Besides, Rushuna is well-trained in hand-to-hand fighting and close-in fighting and she uses her revolver as a cold weapon.

Rushuna is great at analyzing everything that happens on the battlefield calculating all the attack trajectories and the ways to stop them with high precision. For instance, she disrupted the automatic cannon with a single bullet and shot down lots of shells. How did Rushana do it? She calculated the ricochet trajectory of the first knocked-out shell and with its shards she shot down the rest of the shells.

Rushuna’s advanced fighting techniques are impressive: she is able to direct ricochets, hit an opponent’s barrel, pump bullets one into another to drill a hole in armor, and hit the blade of a sword at a distance of 100 meters.

Furthermore, Rushuna possesses a unique technique which makes her a favorite of this list – Rainbow Star: she fires 12 bullets very close to each other; the bullets rotate in different directions without collisions making it impossible to predict their trajectories: 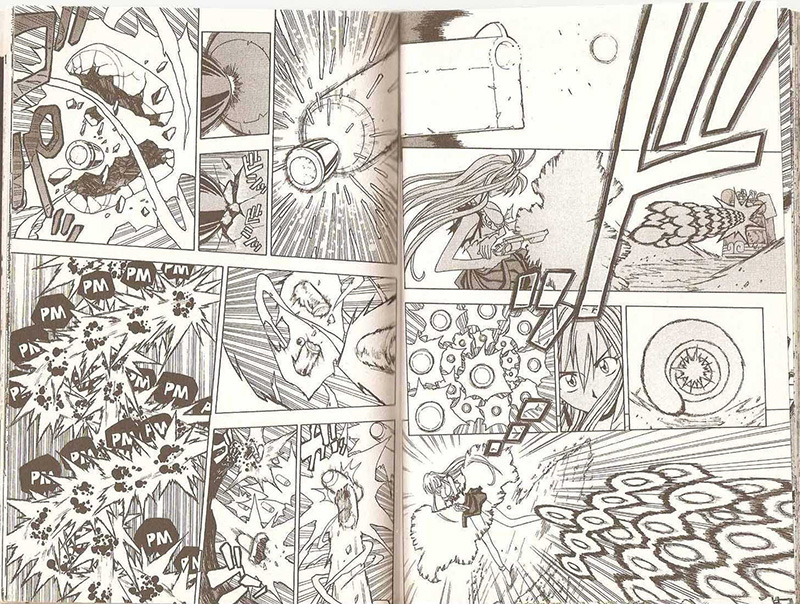 Van Augur is a character in One Piece nicknamed “The Supersonic”, the sniper of the Blackbeard Pirates. 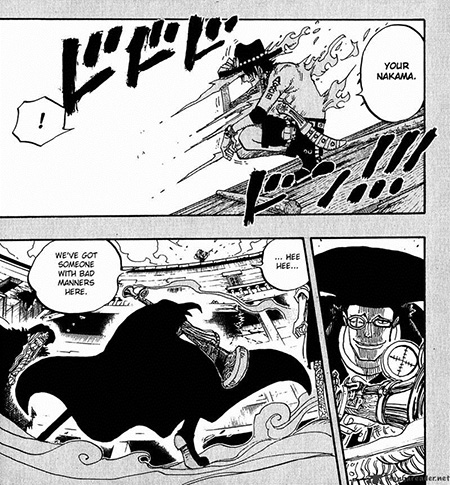 Augur is the exception I mentioned before: he is an undeveloped character. Nevertheless, he earns a spot in the list of the best gunslingers due to his sharpshooting and ruthlessness.

Augur uses a long rifle called Senriku which is meant for long-range shooting. Besides, with his powerful eyesight, he managed to hit seagulls from the island of Jaya he was on at a long range and the distance was so long that it was impossible to see the island from the seagulls’ spot.

Also, Augur is able to shoot at a high rate of speed. We can see that in the scene when he was fighting with Portgas D. Ace. 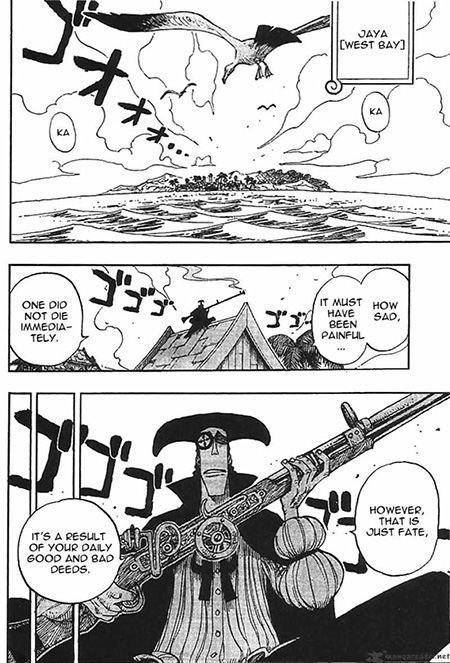 Usopp is a character in One Piece, the sniper of the Straw Hat Pirates. 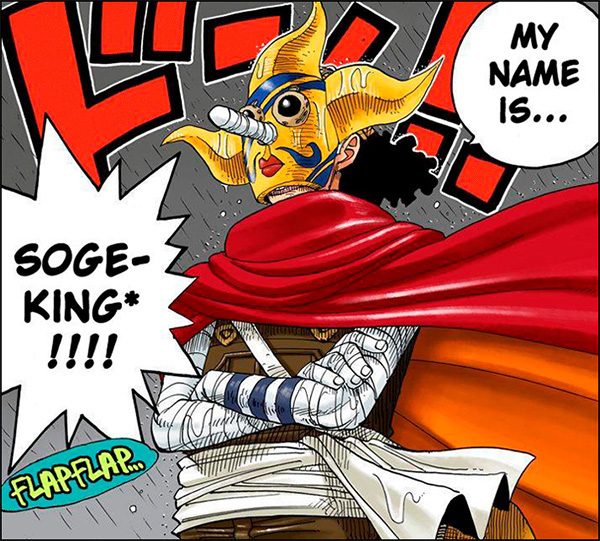 Actually, it’s hard to name Usopp a gunner since he uses a slingshot as a weapon and uses various objects instead of usual shells like incendiary, smoke, or explosive ones. But because of his great potential Usopp takes a spot in this list.

Since Usopp is endowed with acute eyesight, he notices anything before the other members of the team do. Due to his sharpshooting and excellent vision, Usopp could snipe Spandam and his people at a long range despite the wind changing the trajectory of the shell. More than that, after the Timeskip he performed the similar trick at even longer distance. The target that was impossible to see with the naked eye was in the room with a small window. To reach it, Usopp embedded a booster inside the shell and used jet propulsion. 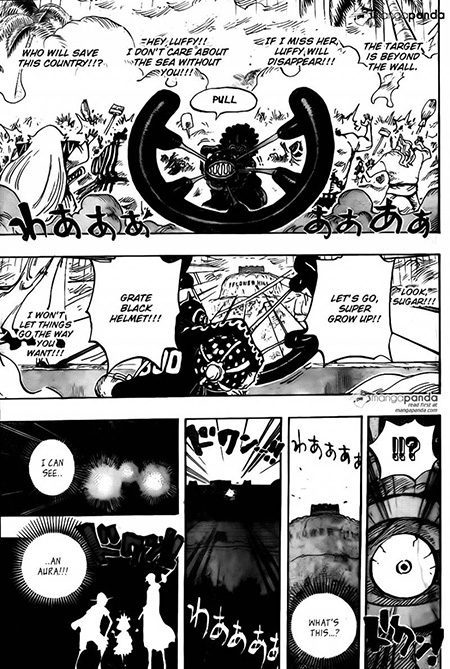 I’ve shared with you my list of the 10 best manga gunslingers. Will you share your favorites that could be included in the list? Feel free to leave your comments.